Popular Motorcycle makes in the Canada 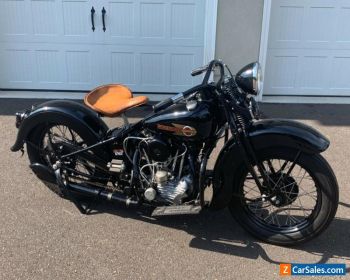 This is the actual, Bill Harley’s experimental, “second generation” 52-cubic-inch overhead valve 1938-39 Knucklehead prototype designed and fought for by Bill Harley in the late 1930’s. There were five prototypes produced, but this example is the only one equipped with aluminum heads and barrels. (It may be the only complete experimental Harley Davidson motorcycle known to remain in existence). The 1938 lower end is overhead-valve only, specific to this model, and utilizes an oil pump from a 1937 motorcycle. The motor is proprietary to this machine using narrow cams and oversized cam cover. With an A-frame style head, Motor No. 4 is marked EX. The lifter blocks are drilled to the channel to vacuum the oil from the OHV heads. The wheels sport one-off narrow stepped hubs with small-spoke rims.

This prototype uses the “dome piston” mentioned in the Harley-Davidson board meetings between 1938 and 1939. Bill Harley took pride that this piston would end his overheating problem. This experimental motorcycle was sold to Roy Egeberg just after production and remained with him until 1974 when it was purchased by restorer Daniel Pugens, a known Harley-Davidson CAC, DAH and OHV specialist.

This experimental 1[hidden information] Harley Davidson motorcycle has recently been restored to its original glory utilizing all of the parts purchased from Egeberg. Egeberg acquired this exact machine from the factory and had it titled in Minnesota until he sold it in 1974. The authenticity of this particular prototype experimental motorcycle is well documented including in the Harley Davidson archives, extensively in Herb Wagner’s “Harley-Davidson 1[hidden information]” and in Jerry Hatfield’s “Inside Harley-Davidson.” This 1938-39 motorcycle may be the only experimental Harley Davidson to be released from the factory.